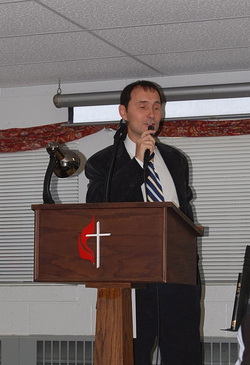 Dr. Alexander Tsutserov whose incredible story going from KGB agent for the communist government of the former Soviet Union to the leader of the Moscow Christian Seminary led worship at FUMC in Johnson City on October 30, 2011.  Here is part of his story. You can also listen to an audio recording of the message using the Sermon Audio Play Tab.


Testimony of Sasha Tsutserov
– From KGB Agent to God’s Ambassador
My parents were members of the Communist Party. They never spoke of God or the Bible. However, when I was five years old, my grandmother insisted that I be baptized in the Orthodox Church. This was all done in secret — miles outside of Moscow, inside a dimly lit sanctuary. Although I was young, the Holy Spirit touched a hidden yearning in my heart for spiritual reality.
Russia had lost virtually all traces of Christianity during 70 years of Communist Captivity. Her legacy to me was one of atheism. I became a member of the Communist Party and secured a position in the KGB. I had a beautiful wife Natasha, a precious daughter Julia, good friends, a bright future, and all that I dreamed of as a young man.
Julia befriended an American girl whose father was a missionary in Moscow. Soon after, Natasha was engaged as their private Russian language tutor. As the head of my home and a KGB agent, I felt obligated to investigate these foreigners who had made such an impact on my family. I was awestruck by the humanitarian aid distributed by their church. And I was irresistibly drawn to their joy for life, for each other, and for the Lord. Step by step, I began to realize their generosity and joy stemmed from their love for God. At first, I gave God a 50/50 chance: since no one could prove God’s existence, then no one could deny Him either. I stepped away from my aggressively atheistic realm. Then, while praying at one of the church retreats, I had a vision. I saw God standing on the top of a mountain. I felt I was a jar of clay. God was pouring down pure gold of the Holy Spirit right inside of the jar – me. From that moment on, I needed no evidence for God’s existence, for I knew God in Jesus Christ. I came back home that day. My wife Natasha met me in the door and said, “What’s wrong with you?” I said, “What’s wrong with me, honey?” She said, “You are smiling!” You see, I had never smiled before. But that day Jesus made me smile. Now, my smile gave me away. I did not know any better than to admit that I became a Christian. She, in turn, confessed to me that she had become a Christian even earlier than I did only she was scared to death to talk about it with her husband, a KGB agent! In July 1993, I was baptized and openly proclaimed my faith in Jesus Christ.
I soon realized I could not keep both my faith and my job, so I quit working for the KGB. We – as a part of a team of ten converts – planted a church in Moscow. And I also knew God had called me to ministry in education. But there was no school in Russia offering a degree in Biblical studies because the Communists had prohibited theological training. Therefore, I had to study abroad. In 1997, I graduated from Asbury Theological Seminary in Wilmore, Kentucky with a Master of Divinity degree. In 2004, I earned a Ph.D. in New Testament at the University of St. Andrews in Scotland. While studying, I also worked at the Moscow Evangelical Christian Seminary by consecutively taking each and every position the school had – from a secretary to the provost.
Nowadays, I am a full-time minister - director and professor of the Moscow Seminary. We are raising a whole new generation of Christian leaders, so from scratch. Under Communism, more than 200,000 Christian leaders were martyred and nearly 40,000 church-owned buildings were destroyed. I now have realized a new dream. Not the dream I sought as a young man; that dream did not include God. But the dream of you and me together training men and women to evangelize the lost and plant churches across Russia and the former Soviet Union is becoming a reality! 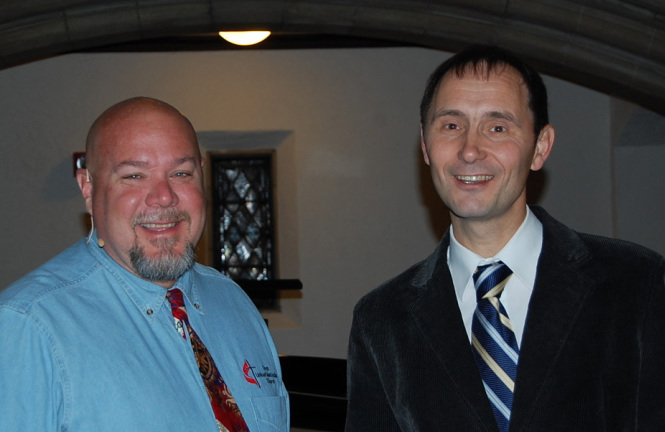